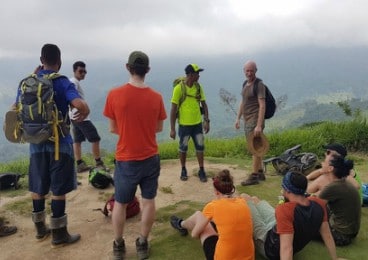 I was already looking forward to arriving in Santa Marta when I left Cartagena. It was not my first trip to Santa Marta though. My first holiday there was back in 2009 when I decided to backpack through Colombia. Since then, I had visited Santa Marta several times, the last of which was in October of the previous year during a holiday with my dad.

The old town of Santa Marta is small but pretty. There are many restaurants, street musicians, and artists, and in terms of hotels, the place has developed a lot in recent years. As always, I stayed at my favorite hotel, which is run by an Italian woman and her daughter. I always feel at home here. The hotel has no frills and the price is absolutely fair.

On my last visit, I took a trip to Tayrona Park with my father. It is really beautiful and has incredible beaches where you will not find a soul. Due to the intense sunshine, however, you have to be very careful that you do not burn yourself.

Tayrona Colombia is the perfect destination to enjoy nature, and even if you do not have the necessary fitness for a long walk, you can ride horses through the park. Various beaches of Tayrona Park are also accessible by boat from Santa Marta. For more information about activities in and around Santa Marta you also can consult my Santa Marta Travel Guide.

This time, however, I had no time for Tayrona Park. I was here to visit Ciudad Perdida, the Lost City trek. This is repeatedly compared with Machu Pichu in Peru.

I can now say that a comparison is quite permissible, although the dimensions of Machu Pichu are a lot more generous. I checked with the local travel agency and learned that there are packages for four, five, or six days. I decided to do the Lost City trek in four days, and the next morning the trip began.

There are more comfortable ways to get from point A to B than in the back of a jeep for 2-3 hours. There was no highway, and instead we were driving along an uphill road riddled with holes. I would describe it as holes with small bits of road around it.

Upon arrival, we were all glad to get out and stretch our limbs; however, before we started the march, lunch was first on the agenda.

After dry fish with rice, we were ready to tackle the route. At the travel agency they had warned me to wear synthetic clothing over wool because of the humidity. They had told me that I was bound to get wet either from sweating, the rain, or crossing a river.

And boy were they right. hey should be right. The first day we managed to avoid the rain and remained reasonably until we decided to take a swim in the river.

All participants were given the choice of either jumping from a good height into the river or descending into the river from a lower point. . Our guide did it right and jumped headfirst, shoes and all, including shoes, from about 5 m. I, as the oldest participant, followed suit but left it at a normal jump. The water was pleasantly cool and refreshing after a long day.

The second attraction was a rope suspended from a tree above the river. This pleasure lasted only briefly. On my second attempt, over motivated to make the largest possible circular swing with it exhaust the centrifugal forces, I almost brought the whole tree down with me.

The toy was then unfortunately broken. It seems that the Colombians were not expecting a Swiss infantryman to be using their toys.

Back at the camp, there were two ways to sleep. Cabin beds or hammocks. Despite the additional weight, I had brought my own hammock and the necessary materials. When I took a closer look at the existing infrastructure, I was relieved by my decision.

The next morning, however, it seemed that all the participants had slept very well. After a sumptuous breakfast, we made our way onto the second stage at an early hour. The hike was really nice and due to the altitude difference, the fauna changed constantly.

At some points, the sea was still visible at a distance. However, some stretches uphill were very exhausting, and my clothes were drenched in sweat. Luckily, the food was not lacking, as there was always something to eat or drink.

During our stops, our guide provided us with some interesting information. He told us about the he history of the area, which included the cultivation of coca and marijuana that was later destroyed by the state. The efforts of this are still relevant even today, as the pesticides used destroyed the natural balance of the region.

We also had a translator who translated everything from Spanish to English, as most of the participants in our group did not have a mastery of Spanish. We concluded this day with dip in the cool water and a nice dinner served afterwards.

On the third day we got up early once again. It was going to be particularly exciting, as a river crossing and visiting the Lost City were on the program. To cross the river, the leaders of the various groups harnessed a rope.

This gave us something to hold on to so as not to get swept away by the strong current. Immediately thereafter, we ascended a steep staircase to arrive at the Ciudad Perdida. Uphill was not a problem, but I worried about going down the stairs again. The steps were sometimes very high, a bit slippery, and designed for very small women’s feet.

At the top, members of the Colombian armed forces greeted us. Guards have been stationed here since the beginning of the 2000s when a tour group was kidnapped by guerrillas.

Furthermore, we were lucky and were able to meet an indigenous spiritual leader who also sold lucky bracelets. The Lost City was very impressive, and I really liked it. We were told about the different zones and the function they served. In addition, they told us about what is was like living here and gave us some history on the group that built this city.

Of course, all of us visitors shot millions of selfies. After a few hours in the Lost City, we made our way back. Shortly after the descent, the rain greeted us again, which would accompany us until our return to Santa Marta.

From this point on we were constantly wet, but that did not matter because the climate was pleasantly warm. The rain was a welcome relief during the march and only the feet suffered.

On the evening of the third day, we were all happy to arrive at the camp. A shower and some dry clothes were a blessing. Everyone slept well that night. On the fourth day, we started early in the morning and everybody was very motivated after three wonderful days behind us. In addition, the sun was shining in the Lost City, which made our stay very pleasant.

However, the distance to be covered on the fourth day was long and we were on the road for 6 hours, and some participants began to suffer some health issues. A few were regularly jumping in the bushes and one had to be transported back on a mule. After several discussions I learned that these were not isolated cases.

Due to the sanitary installations and the general hygiene, this was a normal occurrence. Fortunately, however, I was not affected. I ignited the turbo and was the first to get back to the starting point, where the vehicles picked us up. The last of the group arrived 2 hours later. Everyone was more than happy to arrive in Santa Marta a short time later.

The lost city trek is certainly a worthwhile option; however, due to the limited infrastructure and the distance to be covered, one should be prepared physically.

This is just one of the small pieces of all the adventures you can find in Colombia. In my Colombia Travel Guide you will find a great overview of many more destinations you can visit. If you would like to travel a bit more comfortable and in style, customized and luxury travel are my specialty.

Activities and Tourist Destinations in Colombia

Dear reader, below you will find a list of incredible activities and tourist destinations to do in Colombia: