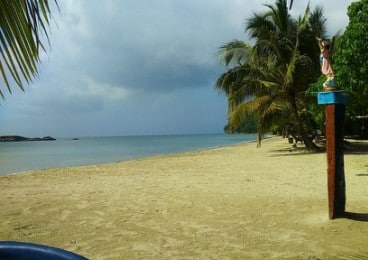 After my first semester at the University de Los Andes in Bogota, I wanted to travel Colombia, so when the university announced the holiday schedule, which began in late November and lasted into mid-January, I knew I would have some time.

After an extremely hard semester, entirely in Spanish (I came to Colombia with rudimentary language skills), I wanted a beach holiday, where I could relax and participate in some water sports. All of my Colombian friends therefore advised me to travel to San Andrés, in the Caribbean. The praises of San Andrés seemed infinite. The geographical position is unique, as the island lies near Nicaragua, about 700 kilometers off the coasts of Colombia.

I had booked an Airbnb for the first few days on the island’s capital to get an idea of the island and figure out my game plan. The capital of San Andrés is unfortunately a typical example of haphazard development and construction, down to the duty-free shops in the streets that makes it a paradise for mass tourism. I was told that the domestic culture and businesses had been displaced by high amounts of immigration from the mainland. The scarce public beach is besieged by human masses. The sea is beautiful and known for its 7 different shades of blue. Unfortunately, there is quite a bit of trouble in this area. Sounds of jet skis and boatloads full of tourists pollute the coastline, making for an unpleasant beach day to say the least.

Fortunately, the southern part of the island is less developed. I was able to trot around and explore on a golf cart; however, there are no sand beaches that are easily accessible, aside from a few hotels. After two days, I had decided to travel around and evaluate my options. My holidays needed to include something spectacular. I came across the neighboring island of Providencia, which can be reached by ferry within 3-5 hours. On the same day, I bought an overnight pass for the next day and booked a bed & breakfast.

On the next morning, I underwent the usual security check at the harbor entrance. In addition, all passengers received anti-nausea pills to take. The ferry, which was more akin to a catamaran, was quite large and made a safe impression. After a 30 minutes ride, which took us outside of the protective area of the island and into the open sea, we got the full wave. Plastic bags were distributed and a regular “Vomit Party” began. After over 4 hours, about 70% of the passengers had surrendered.

Upon arriving in Providencia, I was very happy to be back on solid ground. After the obligatory security and baggage check, a taxi took me to my accommodation. My hostess greeted me cordially. She was a teacher in the local primary school and told me about the local culture. I learned that while the official language is Spanish, they speak Creole as well.

For decades, there has been a general ban on construction, which keeps immigration and the development of tourism low. Thus, unlike San Andrés, the majority of the inhabitants of Providencia were dark-skinned and, to my astonishment, very tall. Many young men were over 1.90 m tall.

The island is a paradise! I spent the first two-days on the beach, eating fresh fish and relaxing. Time seemed to have stopped and everything was very relaxed here. The most popular activity for tourists was diving, and thus there were several dive centers to choose from. I was told that the underwater world was terrific, and you could see all the big sharks, but as I prefer staying above the water line, I did not want to check it out.

After a week in paradise, I continued my traveling. My conclusion: I’ll be back, but next time with a girl and by plane.

In addition to this review, we also have a Providencia travel guide and a Colombia travel guide, which offer a great overview and information for all travelers. If you would like to travel to Providencia in a more luxurious and tailor-made way, as a travel company in Bogota Colombia, we specialize in this type of travel.