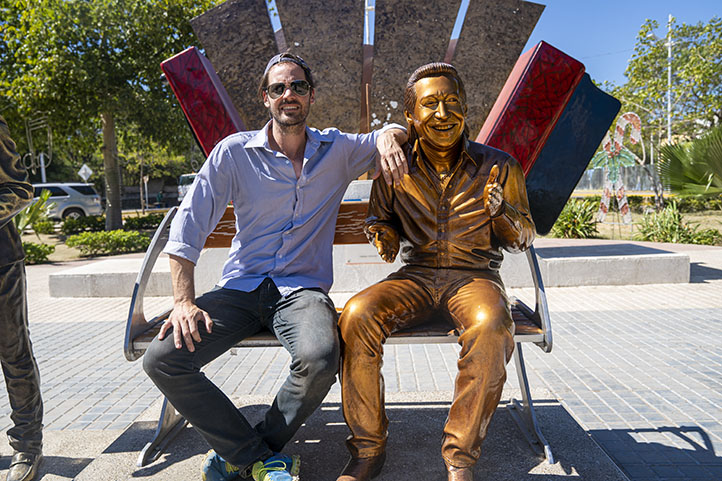 Have you ever looked at the top songs on the Spotify charts and came across artists like Karol G and Carlos Vives? Or maybe you know songs like “Mi Gente” or “Cali Pachanguero”?

If all of this is unknown to you, have you ever watched the Super Bowl, the unique sporting event in the United States, for it? Exactly at this sporting event, Shakira performed and danced with her whole troupe to the rhythm called Champeta.

Colombian multiculturalism is fascinating. In a single country, you can find the most varied rhythms and typical dances. This is the result of the location of the country and the influences of other cultures at the time of the conquest of South America. Currently, Colombia is a republic divided into 32 departments. The country consists of 6 natural regions:

In each of the regions, we find extraordinary music, unique rhythms, and typical dances that demonstrate the cultural mixes at a glance.

Colombian music originated as a result of the cultural mix influenced by the Spaniards, Europeans, Africans, and the indigenous people who inhabited the country about 200 years ago. Thanks to these mixes, today we can call the following genres typical Colombian national music:

Bambuco has been a traditional style of music that originated in the Colombian Andes since the 20th century. The Bambuco is played with stringed instruments and percussions, such as guitar, triple, bandola, and vocals (traditionally it is a two-part duet).

Cumbia has been a traditional music genre in the Colombian Caribbean since the 20th century. It emerged from a process of cultural mixing, in which African elements like drums, indigenous elements like the Millo flute, and Spanish elements like texts (songs and coplas) were combined.

Cumbia offers a melody that is unique in the world and tells a story to the beat of the drums and the rhythm of the dancers. Cumbia is also the basis of many modern music genres. The singer Shakira used elements of cumbia in various live concerts. J Balvin also used this style as the basis of a music track and the singer Carlos Vives is also a friend of this style of music.

Vallenato is cataloged as an intangible and cultural good of humanity. It is one of the most representative rhythms of Colombia. It has been a traditional genre for centuries and originated in the Colombian Caribbean. Vallenato is played with only three instruments: the box (drum), the guacharaca (both percussion instruments that set the rhythm), and the accordion (of European origin) with which the melody is interpreted. It also includes a singer. What is particularly remarkable is the feeling that is expressed in the lyrics of the songs.

In Colombia, salsa is also played and danced with great taste! However, this style of music did not originate in Colombia. Today, however, salsa is also part of Colombia and the country has produced great dancers and musicians of this genre. Who doesn’t know the Grupo Niche, for example?

Undoubtedly, this rhythm has a great influence on Colombian culture. The world capital of salsa is therefore now also in Colombia and the city of Cali regularly brings top dancers to the world stage. The Salsa Caleña is known for its complex choreographies and its speed.

Champeta is a contemporary rhythm from Colombia that was born about 46 years ago in Cartagena de Indias in the Caribbean. It is the result of a mixture of African, Indigenous, and Afro-Colombian rhythms.

Champeta is a very happy rhythm, with songs that reflect the Caribbean culture and very modern dances at the same time. They say: “To create pure joy for the dancing soul, that’s what Champeta is all about”.

Colombia is known as the second home of reggaeton. In 2003, Dady Yankee’s “Latigazo” was the first song played on a Colombian radio station. And what was thought to be the song of the moment, took the youth of the new millennium by surprise. It turned reggaeton into the genre that resounded the country and a great exponent of the genre to the world, setting the trend of urban music.

18 years ago this rhythm entered our country in order to last. Many of the young Colombians and exponents of the genre are at the forefront of the industry. Artists such as J Balvin, Karol G, Maluma, Piso 21 are world-famous and have already received awards like the GRAMMYs.

As we mentioned earlier, Colombia is a multicultural country and thanks to this peculiarity, we have seen the birth of great artists of different musical genres.

Thanks to the wealth of each region of the country, great sounds and very distinctive rhythms have emerged and have managed to captivate the ears of the national and international audience.

Some of the most famous Colombian music artists are:

And although there are still many artists who could be listed here, we will only show them later in our playlist.

Dance in Colombia is a language spoken with the body. It is a cultural and artistic expression that enables thousands of people across the country to communicate with others. Dance expresses feelings, opinions, tragedies, stories, and events that have occurred over time in different parts of the country and that are not lost or forgotten.

In the case of Colombia, you could say that every region and community has developed a special way of dancing. There are so many traditional dances in this country and these undoubtedly show the differences between the different regional cultures of the country.

In the Amazon we have:

It is considered the national dance and there are two types:

Fiestero
This is instrumental and is danced at parties and weddings. It still maintains its constant circular rotation, the original position of the couple encompassing. It contains other Creole nuances, such as the highlighting movement of the shoulders and head. The woman wears a one-piece dress with very striking colors, sometimes with espadrilles. The man is wearing espadrilles, dark trousers, a classic waistcoat, an elegant shirt with a red pocket square, and a hat.

De salón
This can be vocal or instrumental and is performed in serenades. Upscale ladies wear fine dresses made of velvet or taffeta in dark tones, fitted at the waist, and boots. Men wear imported suits made of linen and other fabrics. Long trousers, classic style jacket, English shirt with collar, leather boots, and hat.

In the island region there is:

This dance is representative of the island of San Andres and Providencia and is a traditional island dance. It came to the country at the time of African slavery. It is a calm rhythm that is danced at celebrations or festivals and traditionally at weddings. Couples can do it freely and separately, but with strong hip movements.

In the Caribbean region:

The traditional dance of the Andean region is:

The Bambuco is a very important dance for the rural population and consists of a flirtation between a man and a woman. The woman moves with her hands on her hips. The handkerchief plays an important part in this. Here the woman wears a wide skirt that reaches to the ankle and is decorated with rings, lace and sequins, and a blouse with a flower-decorated off-shoulder neckline. The man is wearing dark trousers, a long-sleeved white shirt decorated with ribbons, a scarf, and a “Jipi Japa” hat.

In the Pacific region:

The Currulao is the most important dance of the Afro-Colombians of the Pacific. It is danced in pairs. Movements are circular and linear. It’s a form of courtship where the man tries to beguile the woman. In this dance, the women wear a long colorful skirt, a handkerchief, and a fringed shirt, while the man wears white.

In the Orinoco region:

This Llanera dance is also popular in Venezuela and is danced in pairs. The body is held still, but the feet do a quick tap on the heel. The man holds the woman’s hands and makes the movements while the woman imitates him. Here the man wears white trousers, a long-sleeved shirt or “liki liki”, and a “llanero” hat. The woman wears a short, floral skirt, a white or floral blouse with a sleeveless off-shoulder neckline, and floral decorations for the head.

There is not a single Colombian who has not danced or sung these songs at some point in his life. Many of the following tunes identify several regions of the country and constitute a priceless cultural heritage. That is why we bring you this listing of Colombian folklore:

“Colombia tierra querida” – Cumbia by Lucho Bermudez
This song evokes a real patriotic feeling as its lyrics evoke characteristics of the Colombian people (faith and joy). It is full of memorable phrases that encompass all the poetry of this country.

“Pueblito viejo” – Bambuco by José Alejandro Morales
This song was composed by José for the town of Socorro (in Santander) and immediately became a hymn for all the ancient cities of our country.

“El sanjuanero” – Joropo by Sofía Gaitán de Reyes and Anselmo Durán
This Joropo became the traditional song of the Reinado del Bambuco. “It is based on facts and situations from our life together,” says Sofía. Let us remember that these texts describe the enthusiasm and joy that one experiences at the festivals in the region.

“La gota fría” – Vallenato by Carlos Vives (version)
This song tells the story of the musical rivalry between Emiliano Zuleta Baquero and Lorenzo Miguel Morales, two great exponents of Vallenato folklore. The famous song by Emiliano Zuleta is more than 80 years old and became world-famous through the interpretation of Carlos Vives.

“La casa en el aire” – Vallenato by Rafael Escalona
La casa en el aire is a composition in which the composer, in the form of a song, captured the fear of more than one father who is worried about his daughter’s future love.

“Mi gente” – Reggaetón by J Balvin
A mixture of this reggaeton with Caribbean sounds, whereby the artist from Antioquia explains that his music knows no borders, genres or ethnicities. And as the song says: ”all my people are moving, look how the rhythm keeps us going, I make music that entertains, the world loves us”, it was the most popular worldwide hit in 2019.

Plus: Here you have a Colombian playlist on Spotify.