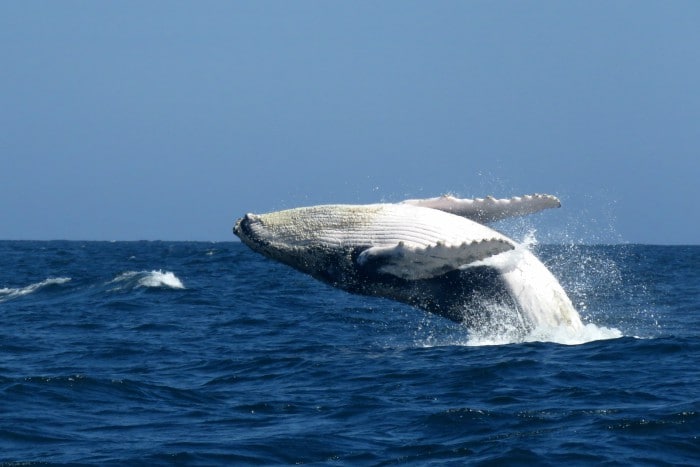 Bahia Solano in the Department of Choco Colombia

Chocó is the westernmost department of Colombia and borders the Pacific and Atlantic coasts. Furthermore, Chocó is the department with the largest dark-skinned population in Colombia. These are also called “Negros”, but this does not give rise to any racism. Our captain was also called “Negrito”, more about that later. After visiting the “Feria de Flores” in Medellín, I continued my Colombia travel and took the plane to Bahía Solano on the Pacific coast.

Until about 2 minutes before landing one cannot see the airfield and feel that you will land directly in the densely forested area. In addition, the landing strip is very short, which makes the landing maneuver also very adventurous. In the plane I had the seat directly behind the pilot. In contrast to large aircrafts, this 20-seater had no door between the cockpit and the passengers.

So I had a clear view to the front. After a spectacular landing with a brusque braking maneuver, I went to the airport control. This consisted of a large table and a handful of policemen. The luggage had to be opened and searched, but more superficial than accurate.  Colombia travelers, welcome to Chocó.

The hotel Balboa, in which I had reserved, wanted to send a driver to pick me up. Even after a detailed search I did not find my driver. So I decided to take care of my own transport and beckoned to a Tuc Tuc. Arrived at the hotel, I moved to my room after check-in. It was very large, had air conditioning and a huge TV. Then I set out to explore the hotel and the area.

The hotel has four floors and from the roof terrace you have a great view. Only the building, which has been built in front, disturbs the view. I was also told that the hotel was built by Pablo Escobar, but this information should be treated with caution. If all those stories would be true 50% of all buildings in Colombia would have been built by the former drug baron. Bahía Solano is not very beautiful and is like many other small places in Colombia. The only difference is that the majority of the population is dark-skinned.

Getting an overview of tourist offers was not so easy as Colombia tourism is not really developed in the region yet. Tour guides and other tourist information were hardly available which doesn’t make Colombia vacation easier for visitors. I visited another hotel and luckily got a name and two business cards. The one business card belonged to a company that organizes whale watching.

I called the number and organized a meeting in the evening. Then I set about connecting my computer to the Internet, which was more than bad. However, I was able to communicate with my staff and receive some emails.

In the evening I met Esteban and Mar as agreed by phone. They told me that they are biologists and have been doing research here for a few months, offering tours as well. Their company, MadreAgua, consists of four biologists, three of whom specialize in whales and one in birds. I have to mention that the Pacific region is very blessed in terms of biodiversity, because of the climate.

The fifth partner is Esteban’s father, the company’s chief financial officer. We had in-depth discussions and I liked the concept of the company very well. We agreed that the following day I would go out to sea with them and a group to watch whales.

The following day, Mar, a young, very pretty biologist from Spain, came to pick me up at the hotel. We walked about 15 minutes to the harbor, where the captain (Negrito) of the boat was already waiting for us. Due to bad weather conditions we had to postpone the trip to the following day. The swell outside at sea was simply too high.

I was not unhappy with the decision as it poured the rest of the day and I was able to invest that time in office work. But rain is nothing special, as the Pacific Coast is one of the wettest regions in the world. The next day it was finally time and we came together with a group of eight people. The boat was rather small, but adequate for our needs.

It did not take 5 minutes until we saw the first whales in distance. Esteban told us that they were working to international standards to disturb marine mammals as little as possible.

However, we observed other boats in the area, each headed full throttle on the whales. However, this always meant that the whales disappeared as quickly as possible. In the following hours we saw various whale groups, back and tail fins. We also saw a humpback whale jumping twice. This was unbelievable luck, because you rarely see this spectacle. Esteban, biologist and guide also provided us with a lot of exciting information from the world of whales.

Later we landed on a sandy beach, crossed a river and had lunch in a hut. Afterwards a short walk and a swim in the river was announced. On a walk we received a lot of information about the local ecosystem and the mangroves.

It was very interesting to get the information from an academic perspective. However, the time flew by and we had to leave already, so we were back in Bahía Solano before sunset. It was a very nice and exciting day and one of the most interesting things I have ever experienced during my Colombia travels and in my entire life. At night, I dreamed of jumping whales.

I run a travel agency in Bogota, Colombia. If you are interested in whale watching in Colombia, do not hesitate to contact me.