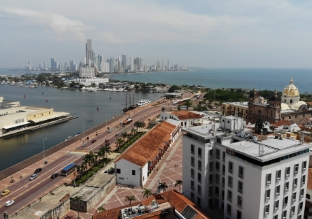 Declared a World Heritage Site since 1984 by UNESCO, the port, fortress and monumental complex of Cartagena de Indias enchants visitors who travel to Colombia with the colours of the facades of their more than 400-year-old houses’, exalted by the sea breeze and the magical sunsets.

Bathed by the waters of the Caribbean Sea and framed by a beautiful bay, Cartagena de Indias is a city full of history and Hispanic reminders, given mainly for its important role in the colonial era as a strategic port and navigation terminal on the Magdalena River, the most important river in Colombia. This role of strategic port is reflected in the fortresses and walls that await the sunset to evoke the struggles of the past which is why it is called “walled city.” Cartagena is one of the most important destinations in Colombia, not only because of its tropical climate of 29°C, but also because of the charm of its colonial, republican and modern architecture, setting the attractions of an intense nightlife, lush landscapes, magnificent beaches, excellent gastronomic offer and an important hotel and tourist infrastructure. We must highlight the romantic streets that inspired and served as home to our Nobel Prize in Literature, Gabriel García Márquez, creator of magical realism.

If you are looking for even more information we can recommend you to check out our Cartagena Travel Guide. Anyway, as a Bogota based travel agency we will give you the best advise you will find about Colombia. 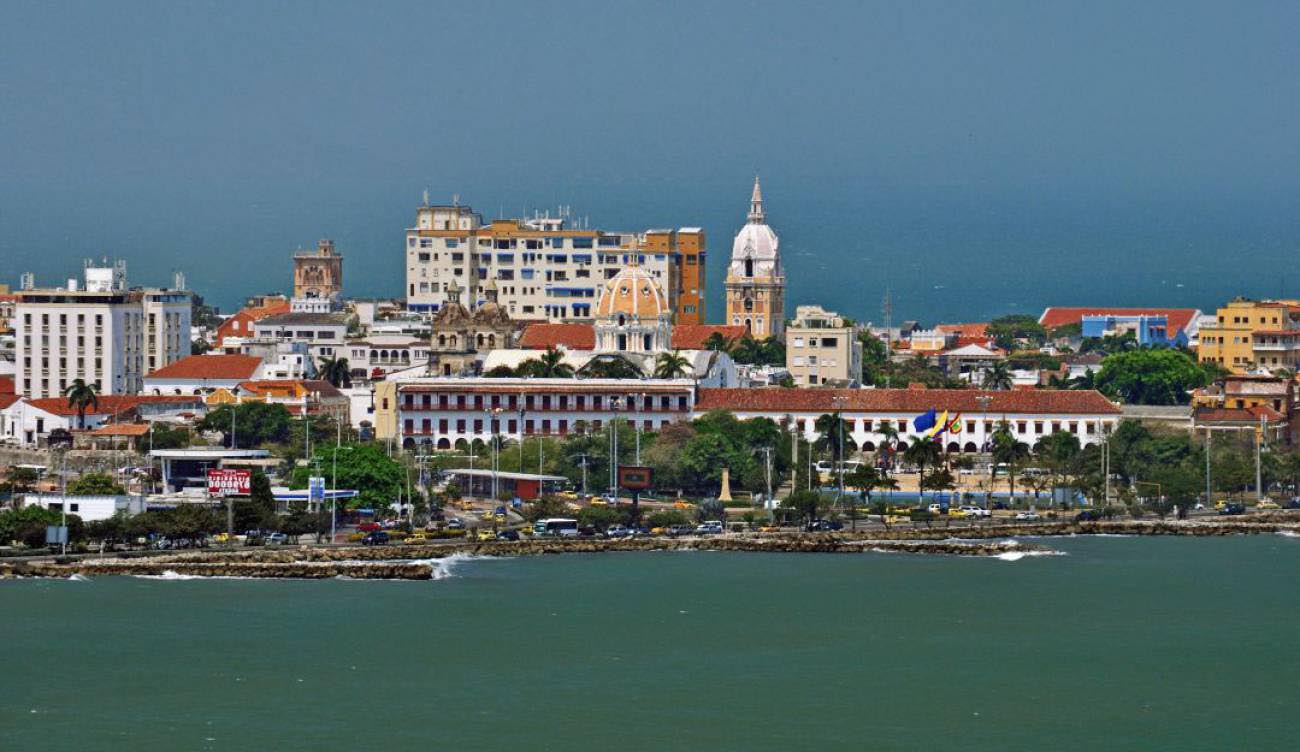 The international airport Rafael Núñez is the most important on the Colombian Caribbean coast and is located 20 minutes away from the historic centre.

Festivities and events in Cartagena

When going to the beach or walking around the city on your Colombia vacation, you must keep in mind that some street vendors offer free samples of their products, and most of the time, they will charge you. We recommend that you not accept such samples to avoid unpleasant moments.

Cartagena has an average temperature of 27°C with 84% humidity. The rainiest month is October, although it rains a lot from June to November. Consider this when packing.

For the visit in the eco parks and jungle areas, we recommend the use of repellent against insects and mosquitoes. 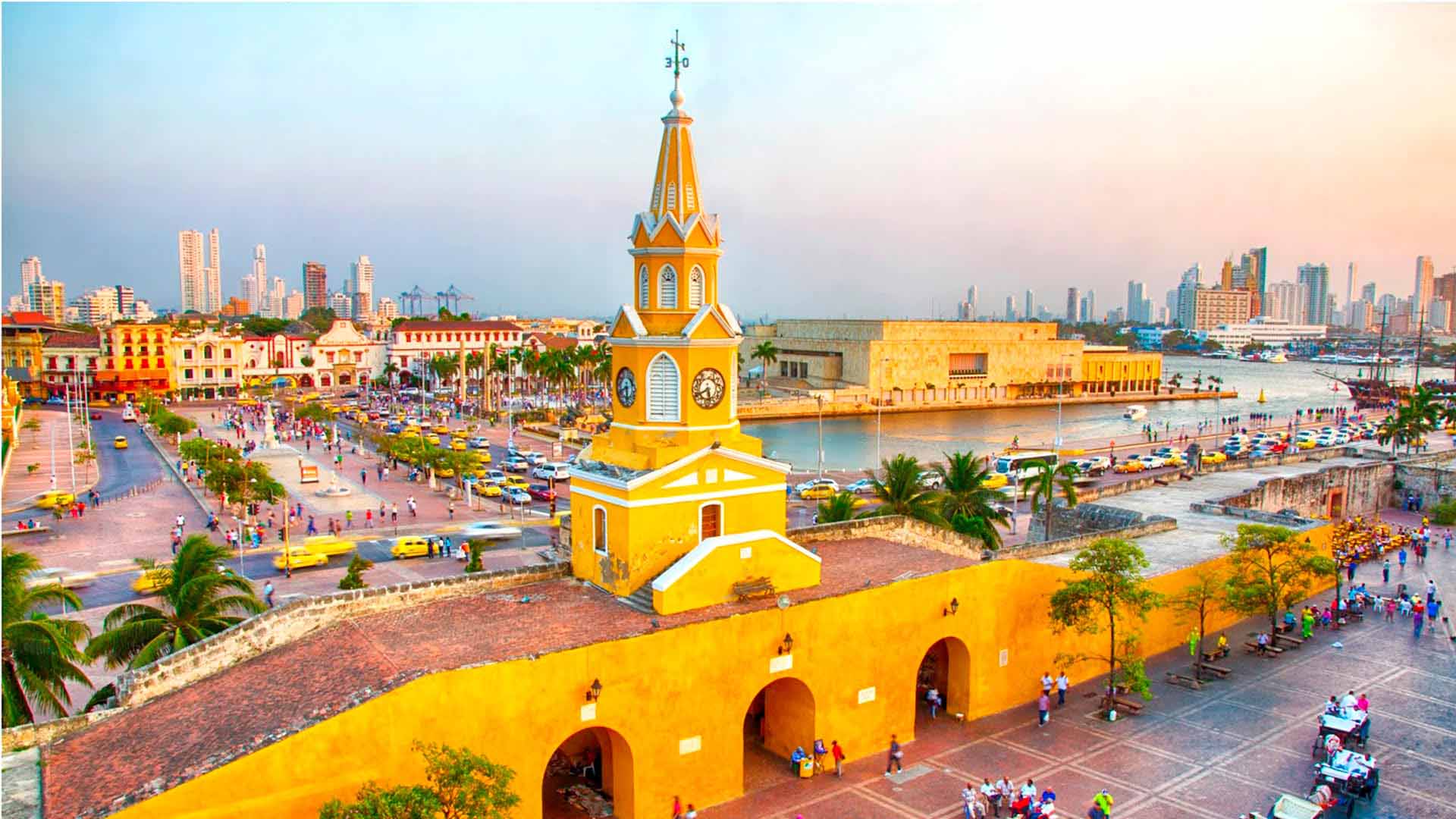 It has been the gateway to the historic centre since the year 1631. In the beginning, only one door was constructed and the lateral spaces served as room for arms, but nowadays the tower has three doors.

The Barú island is 35 minutes away by boat from Cartagena and has one of the most beautiful beaches in the region: Playa Blanca.

Crystal-clear waters, clean and fine sand offer the visitor a perfect space to contemplate the beauty of the landscape and to rest under the sun.

After crossing the Clock Tower, visitors will find the Plaza de los Coches, a place where centuries ago, the slave market was held. Here a wide variety of local markets are positioned, where the tourist can enjoy Colombian delicacies like panelitas, suspiros, melcochas and cocadas.

“Islas del Rosario” is a small archipelago comprised of 28 islands that are part of the insular area of Cartagena de Indias. These paradisiac islands are ideal for those who love contemplation, water sports and marine fauna and flora.

They were constructed to protect the city from the continuous attacks it suffered at the hands of pirates and other military forces. Its construction began in 1586 and ended in 1796, with multiple restorations and additions that were necessary due to continuous attacks by the sea and by Baron Pointis. Today, the walls surround the entire coastal area of Cartagena and adorn the long walks during the beautiful sunsets.

Built in 1536 by the Spaniards on the hill of San Lázaro, it was the target of continuous attacks by the English and French, who later took the castle in the middle of 1697. This tourist attraction is currently the site of important events and social gatherings and is also considered one of the largest structures built in Colombian territory.

In 1981, UNESCO included the castle of San Felipe de Barajas to the list of World Heritage Sites.