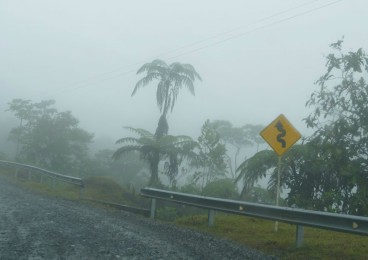 We left the stone sculptures of San Agustin behind and made our way towards Pasto, the capital of the department of Nariño located along the border of Ecuador. We planned the route in such a way that we could divide the journey into stages if necessary. Our first stop was Mocoa. A few months ago, due to heavy rainfall, a landslide arose that killed many locals. Based on the looks of the riverbed, it was not difficult to imagine the devastation of this natural disaster.

After a short while, we left the paved road. The road to Sibundoy took us over a pass called Trampoline of Death. The gradient was enormous and cruising with oncoming vehicles nearly impossible. In addition, trucks always drove on the side facing the mountain. The road reminded me more and more of the most dangerous road in the world, which is located in Bolivia, that I had learned about in a documentary. Sebastian hardly made a sound during this tense ride. I think my swift Swiss mountaineering style tugged at his nerves. In addition, he was not happy about the view at all, as it presented constantly reminded us of the very high drop that awaited us. The fact that it was raining and extremely foggy only added to the situation. Fortunately, we were in vehicle built for such conditions and could overtake the slower vehicles.

Unlike other road users, however, our vehicle was not equipped with crystal ball navigation. Therefore, I had to be careful taking turns and in moments when the visibility was virtually zero…

After a climb of 2,000 meters, we finally reached the pass. The onward journey became more relaxed, as the speed was reduced due to several convoy-driving vehicles. Passing other vehicles was almost impossible, as even slower vehicles on short straights gave their all so as not to be overtaken and to expose their shame.

When we arrived in a shallower area, we took a break in the first village and calmed our nerves huge pieces of fried chicken. The onward journey remained curvy but generally more relaxed.

When we finally arrived in Sibundoy, we used the momentum to get to Pasto on the same day. About an hour before Pasto, we passed the Laguna de la Cocha, where we took the opportunity to capture this impressive view digitally. The closer we got to Pasto, the slower the traffic became. The general speed was limited to 30km/h, but miraculously everyone seemed to stick to it. It should be mentioned here that the “pastusos”, as the inhabitants are called, have to put up with some national backlash. For reasons not ingenious, the pastusos are considered fools throughout the country.

Pasto itself is not a pearl of tourism, meaning that the hotels are quite mediocre. Two hours to the south is the Las Lajas Cathedral, which was built between 1916 and 1949. The monument, which lies in the valley, overwhelmed me to say the least. I have rarely held such admiration for such monuments, but the church appears to have been created based on J. R. R. Tolkien’s The Lord of the Rings.

After this highlight, we thought it could not get any better, but we were wrong. After 2 more hours of driving we arrived at the Azufral Volcano. I’ve never seen a volcano up close, let alone been inside of one. After a, 90-minute walk, we reached the Green Lagoon in at around 4,000 meters above sea level, and it smelled suspiciously of all sorts of gases. In some places it was even steaming and bubbling; however, a local guide told us that we had no reason to worry. Fortunately, this guide even spoke English and immediately landed on our list of recommendations.

More information about all the sites of interest in that region you will find in our Narino tourist information.

After another 2-hour drive, we were back in Pasto, where we went to bed early. Today, having seen two unforgettable places to visit in this beautiful country, made me reminded me of how incredible Colombia is, and if I did not already live her, I would have to go straight to the travel agency and book a trip to Colombia. 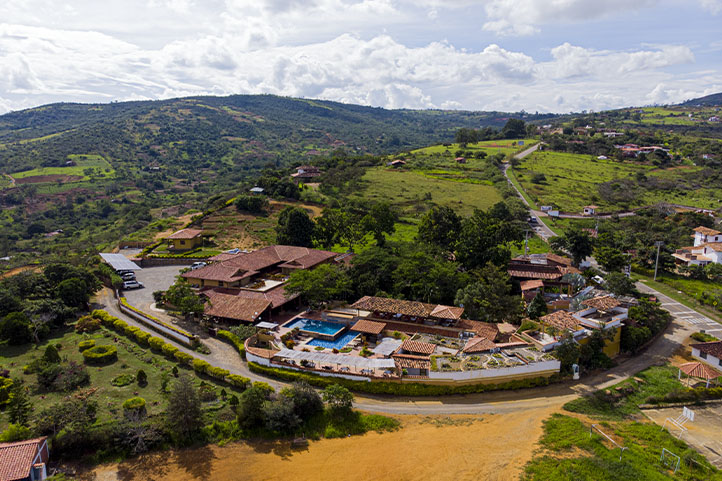 The 10 Best Hotels in Barichara Colombia