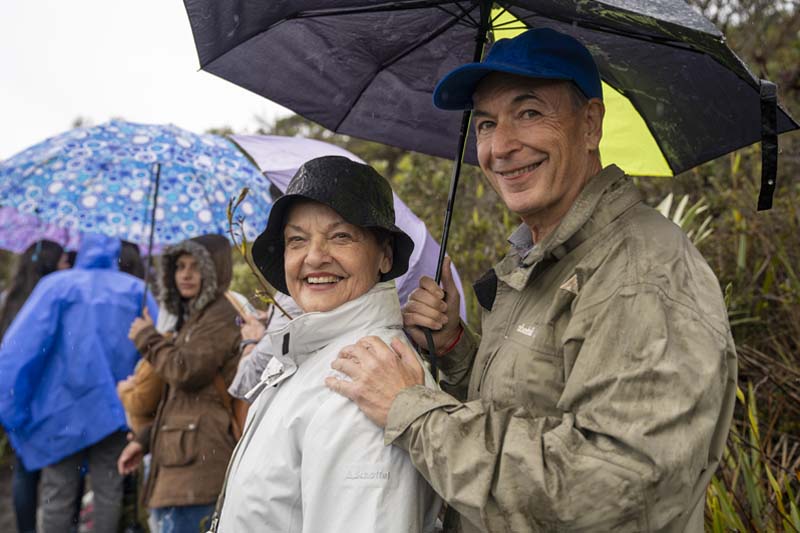 One of the most common myths is that Colombia and Latin America in general are very hot. That’s why I keep seeing that tourists, for example here in Bogota, are out and about in shorts and flip flops. The truth is that Colombia has completely different climates. From the scorching heat of a desert to a glacier, the whole range can be found on the territory.

An example of this is Tunja (Boyacá), where temperatures below 5 °C (41 °F) have been recorded, while cities like Santa Marta (Magdalena) constantly have temperatures above 25 °C (77 °F). This is due to factors such as altitude, latitude, and proximity to the sea.

The altitude is the main reason why there are so many climates in Colombia. It is estimated that for every rise of 187 meters (613 feet) above sea level, the general temperature drops by 1 °C (33 °F).

The warm flor is the most widespread in the country and covers 80% of the country’s area. It is characterized by altitudes from 0 meters (0 feet) to 1,000 meters (3,280 feet) above sea level. In the areas where this warm floor occurs, the temperatures are usually above 24° C (75 °F).

This floor is found in areas higher than 4,000 meters (13,123 feet) above sea level. The temperature in these areas is below 0 °C (32 °F). Glaciers cover 0.1% of the national territory, in special areas such as the Sierra Nevada de Santa Marta and El Cocuy.

Another element that affects the climate in Colombia is latitude. Colombia lies on the equator, just above the intertropical zone. This means that the rays of the sun come in almost vertically. Something that surprises our visitors is that the climate is very stable for most of the year. That is why it is constantly very hot or cold in some parts of Colombia. It is thanks to the altitude that not all regions have the same temperatures.

In Colombia there are no seasons, instead, there are two distinct rainy and dry seasons during the year, which vary depending on the region.

Since Colombia borders the Pacific and Atlantic Oceans, the sea breezes help regulate temperature and also help generate rainfall on the coast.

Colombia is divided into 6 different geographical regions, which have different climatic zones. Each region differs from the others in terms of geography, relief, climate, biodiversity, and culture. 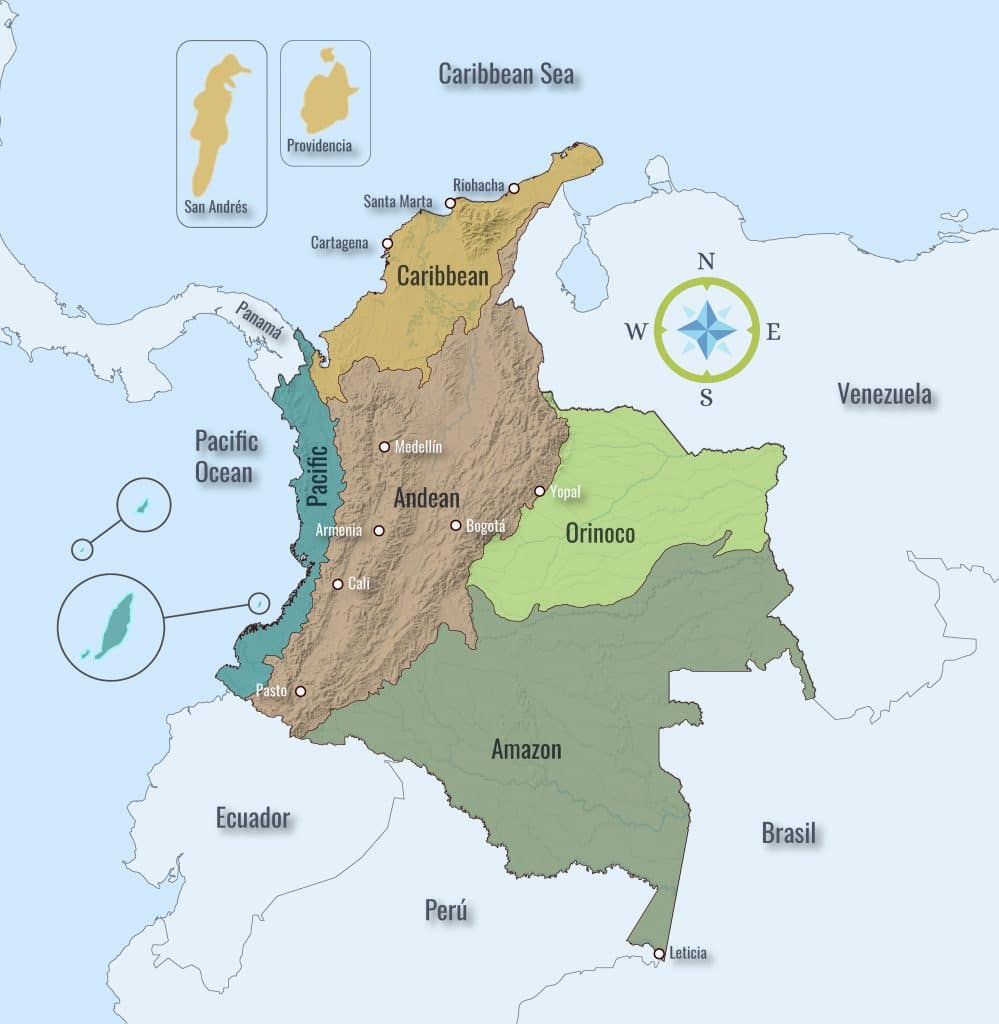 Rainy season in the different regions of Colombia

Before we talk about the climate in detail, we would like to introduce the rainy season in the different regions of Colombia. As can be seen below, the temperature is usually constant throughout the year (regardless of location), but the amount of rainfall can vary depending on the month. 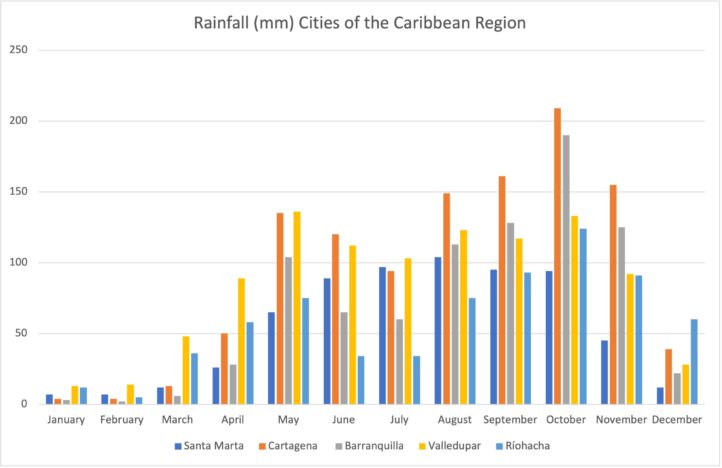 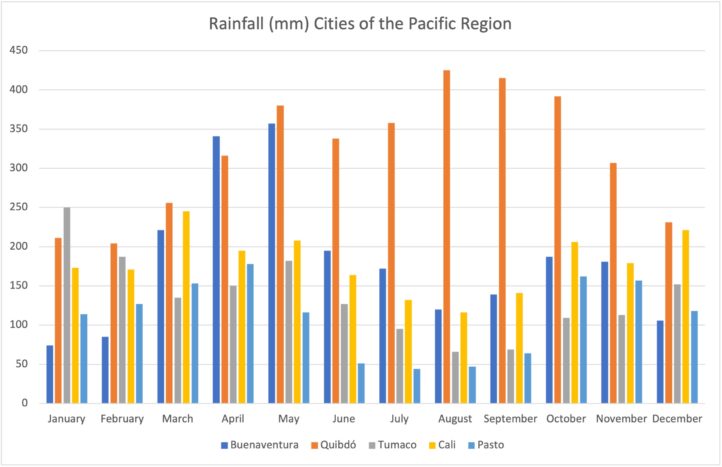 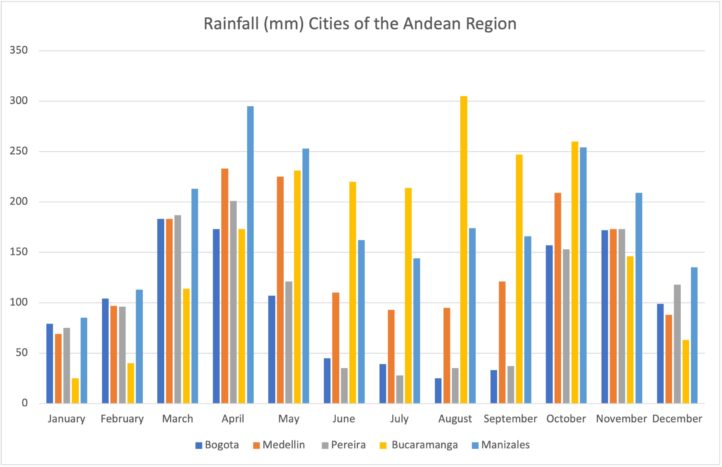 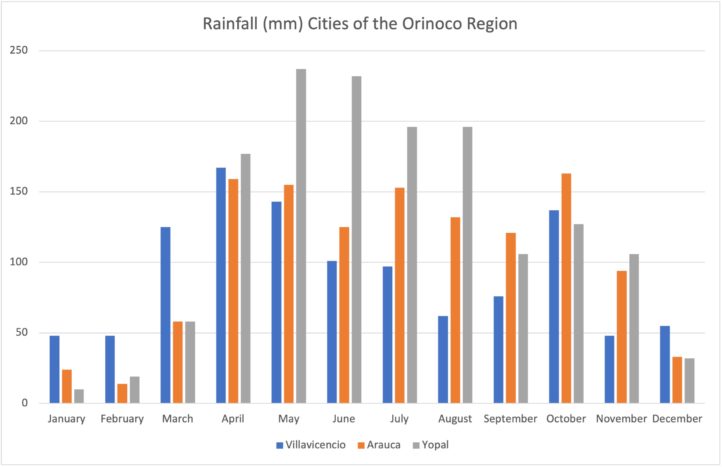 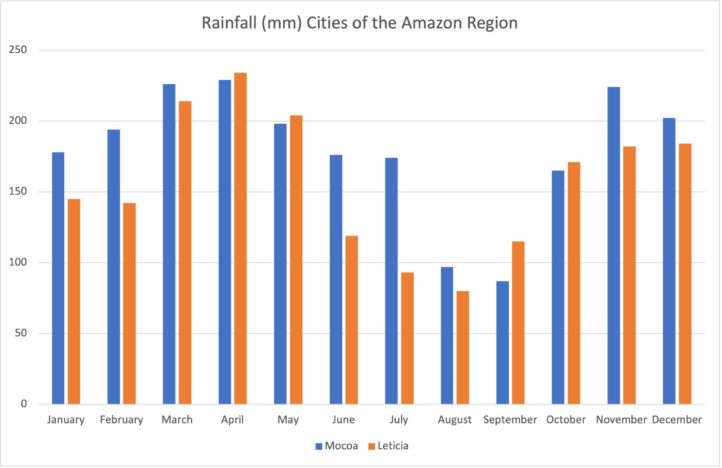 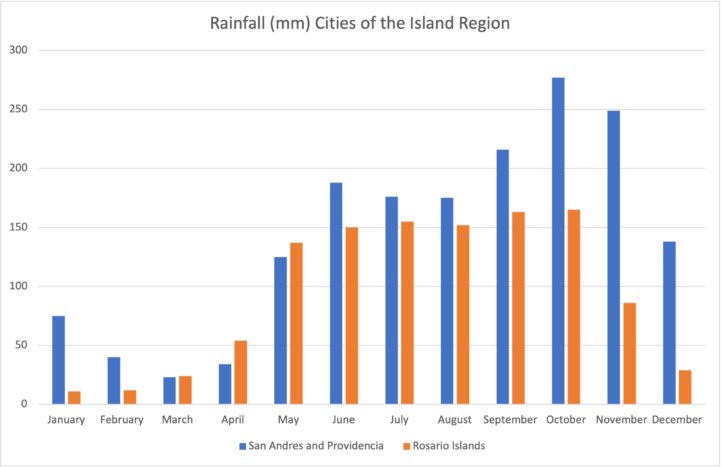 The Caribbean region makes up 11.6% of the national territory and is located in the northernmost part of the country. The departments are Atlántico, Bolívar, Cesar, Córdoba, La Guajira, Magdalena and Sucre. Some of the most important and touristic cities are Santa Marta, Cartagena, Barranquilla, and Valledupar.

It is one of the hottest and most colorful areas of Colombia. It is also one of the most popular destinations for domestic and foreign tourists. You will find incredible beaches, festivals, gastronomy, and colonial charm there.

Climate in the Caribbean region

In general, this region is characterized by a tropical climate, so constant heat is common. The average temperature is 25 °C (77 °F). The humidity is usually between 77% and 82% (lower in December).

The rainy season is between May and November. During this time the humidity is higher, the average temperature is usually around 28 °C (82 °F). Precipitation can occur suddenly but does not tend to last long.

In the Caribbean, there is hurricane season from June to November. On average there are between 13 and 19 tropical storms each year, although curiously there were 30 of these atmospheric phenomena in 2020. These storms occur in the Caribbean Sea but do not reach mainland Colombia. The rain fronts created by this can, however, lead to a week of uninterrupted rain.

The Pacific coast is one of the most biodiverse regions in the world. It is located in western Colombia on the Pacific Ocean. This region occupies 11.5% of the national territory and consists mainly of the Chocó department and the coastal areas of the Valle del Cauca, Cauca, and Nariño. Some important tourist cities are Buenaventura, Quibdó, and Tumaco.

Climate in the Pacific region

The Pacific region is characterized by a tropical climate, so the temperature is usually high (it can reach over 28 °C (82 °F)). However, what really stands out here is the amount of rainfall. The Pacific coast is considered to be one of the wettest regions (with most rainfall) on the planet.

It rains an average of 10,000 cubic millimeters (0.61 Cubic inches) per year. The rainfall is frequent and long-lasting. Due to the precipitation and the high temperature in the region, the humidity is also high, averaging between 85% and 90%.

Floods are therefore common on the Pacific coast. The rainiest months are January to October. The constant rain also often leads to landslides. In 2019 alone, 19 people died as a result of this phenomenon in the department of Cauca. In the event of persistent rainfall, the IDEAM (Instituto de Hidrología, Meteorología y Estudios Ambientales) usually warns against visiting certain areas threatened by landslides.

Located in the heart of Colombia, this region represents 30% of the country’s area and, with around 34 million inhabitants (2015), is also the most populous in the entire nation. The departments are Tolima, Santander, Risaralda, Quindío, Norte de Santander, Huila, Cundinamarca, Caldas, Boyacá, Bogotá D.C., Antioquia, Cauca, and Nariño. Some of the most important and touristic cities are Bogotá, Medellín, Pasto, and Cali.

Climate in the Andean region

The temperate climate can only be found in the Andean region. Increased precipitation is recorded in the months of March to May and September to November. The humidity is usually above 80%.

The temperate climate is found in certain areas of the departments of Caldas, Risaralda, Quindío, Tolima and Valle del Cauca, Antioquia, Huila and Cundinamarca, as well as in cities such as Medellín, Pereira and Armenia.

Bogotá, the capital of Colombia, lies at 2,640 meters (8,661 feet) above sea level and is the most important city in Colombia with this climate type. The rainiest months are February to May and October to November. The air humidity averages over 80%.

This type of climate and ecosystem is only found in the Andean region. In these areas the temperatures are low and there is less vegetation.

The Páramos are the largest source of water in Colombia. In Cundinamarca, for example, there is the Chingaza National Park, which provides at least 80% of Bogotá’s water supply. Some paramo areas in Colombia are Páramo de Belmira (Antioquia), Páramo de Santurbán (Santander and Norte de Santander), Páramo de Cuchilla Negra and Guanaque (Bogotá and Cundinamarca). The full list of Paramos can be found here.

As mentioned earlier, this thermal floor is only found in certain parts of Colombia. Temperatures are below 0 °C (32 °F) and you can find snow-capped peaks and glaciers. In the Andean region is the Los Nevados National Park, between the departments of Tolima, Caldas, Risaralda, and Quindío.

This region is also known as the Eastern Plains and is one of the most photogenic areas in Colombia. The Orinoco region is legendary for its beautiful sunsets.

The region consists of four departments (Arauca, Casanare, Vichada, and Meta) and is located in the east of the country, on the border with Venezuela. The area is wide open with a great variety of water basins and is one of the most popular areas for bird watching. Some of its cities are Arauca, Yopal, Villavicencio and Puerto Carreño.

Climate in the Orinoco region

Most of the Eastern Plains is at an elevation of 500 m (1,640 feet) above sea level, which means the temperature is usually high. The climate in this region is constant. There is a rainy season from March to November. In some cases, large parts of the country are then flooded and travel is only possible by plane. The dry season is from December to February.

The Amazon is the largest region in Colombia and one of the most important on the planet as it has been declared a World Nature Reserve. The Amazon is also known as the earth’s green lung since its main function is to fight off the huge emissions of CO2. The area borders Peru, Brazil, Venezuela, and Ecuador. It is a sparsely populated area and most of the population are indigenous people who help conserve the rainforest.

This region is made up of the departments of Amazon, Caquetá, Guainía, Guaviare, Putumayo and Vaupés. Some of the most important towns are Mocoa, Leticia, and Florencia.

Climate in the Amazon region

The Amazon region has a humid tropical climate. The average temperature in these areas is between 24 °C (75 °F) and 27 °C (81 °F). The average humidity is 85%. In the Amazon region, rainfall is constant. In certain regions, more than 3,000 millimeters (118 inches) of rainfall are recorded per year. There are some months when it rains less. In Mocoa there is less rain in August and September. In Florencia, there is less rainfall in January.

In general, however, it rains in this region for at least 200 days a year. Floods usually occur in early March to late July and in October. Also, in some areas, constant cloud cover blocks the sun. On average there are only between 3 and 4 hours of direct sunlight each day.

The flood season occurs during the rainy months. The Amazon then reaches its maximum flow and inundates part of the Amazon rainforest. Despite the floods, that doesn’t mean that you can’t visit this region. On the contrary, it is a great experience, because during these months you can visit the “igapos”, as the flooded forests are called, either by boat or canoe. In June the river level returns to normal. From this point on, the best way to explore the Amazon is on foot.

The island region is the smallest region of Colombia and includes all areas outside the land territories, more precisely all islands of the Pacific and the Caribbean. These include, for example, San Andres, Providencia and Santa Catalina Islands, Rosario Islands (Caribbean), and Malpelo and Gorgona Islands (Pacific).

Climate in the island region

This region is usually hot and the average temperature on islands such as San Andres is 27 °C (81 °F). The rainy season in San Andres is between mid-May and November. The dry season is between December and early May, which is the best time to visit.

Another tourist attraction is Gorgona Island. This has an average temperature of 28 °C (82 °F), with an average humidity of 90%. Often there is fog and haze.

The island region is usually windy, which is a bit of a cool off given the high temperatures. But it is also important to mention that tropical storms (hurricanes) can occur in this area. One example is Hurricane Lota, which almost completely destroyed the island of Providence in 2020.