Places to take photos in Cundinamarca

When asked about an iconic place in Bogotá, the first thing that springs to mind is La Candelaria, which is in the heart of Bogotá. This emblematic place is characterized by its colonial buildings, a multitude of attractions and of course the best place in the capital to take photos.

Why should you take photos in La Candelaria?

La Candelaria is a popular destination for tourists and photographers. The streets are colorful, the buildings traditional and beautiful, and there is a lot of graffiti.

In addition, many tourists and locals like to look for and take photos of the famous statues of La Candelaria. These are “hidden” in different places, there are more than 20 of them and they represent iconic figures of the place.

I have lived in La Candelaria since 2015 and take photos and film here regularly. Nothing has ever happened to me and I have never been a victim of theft or robbery. However, one should always be vigilant and exercise a certain degree of caution, as in all major cities in the world.

About 10 minutes from La Candelaria and next to the Plaza de Bolivar (where the Palace of Justice, the Capitol and other representative buildings of the capital are located) is one of the most culturally rich and photogenic places in all of Bogotá, the Carrera Séptima.

Why take photos on the Carrera Séptima in Bogotá?

The Carrera Séptima is one of the most interesting cultural spaces in Bogotá, where you can find various human statues, artists, singers and of course the famous “figures” of the capital. A visit is particularly worthwhile on public holidays and weekends.

An example of the “characters” of the Septima was the late and famous General Sandúa, an elderly man and street dweller who for years preached messages of peace in his “uniform” and with a beret.

One of my interns had the opportunity to meet him and he shared how General Sandúa drew the attention of both locals and foreigners. It was a “must” to take pictures of him (there are even professional photographers who have produced photo books and other projects about him). Unfortunately he passed away in 2020.

Although I’ve never had a bad experience here either, it is better to be safe than sorry. Before photographing a human statue or an artist, tip them because street artists work after all. It is even better to speak to the artists and they usually pose with great joy, because Colombians love foreigners.

One of the most famous places in Colombia (and even Latin America), albeit for less positive reasons, is the famous Salto del Tequendama waterfall. The Salto del Tequendama is a beautiful 157 m high waterfall that flows into the Bogotá River. Rumors of paranormal phenomena surround this place, as many people have committed suicide by throwing themselves from the edge of the waterfall.

Note: If you want to know more about other waterfalls in Colombia, you can check out my blog on the subject. If you are interested in the paranormal history of the Salto del Tequendama, also check out my blog about mysterious places in the country.

Why should you take photos in the Salto del Tequendama?

Still, the Salto del Tequendama is more than just a paranormal place. Its great beauty and the museum there make it possible to take beautiful photos of the water. With the waterfall in the background, beautiful panoramic images are also possible.

The big cities like Bogotá or Medellín aren’t the only places where you can find great places to take photos. One such beautiful place is the Piedra Capira, a spectacular viewpoint in Guaduas, one of the Colombian cultural cities.

Why should you take photos in the Piedra Capira?

The Piedra Capira offers one of the best views in Colombia. From there you can see part of the Magdalena River and the snow-capped mountains of Ruiz, Santa Isabel and Tolima.

A few years ago I had the opportunity to take photos from the Piedra Capira, and I can only recommend it. I was there in the evening hours and the view is beautiful, the colors of the sky are a great photo opportunity. From there you can take beautiful panoramic views and take very good selfies.

Places to take photos in Antioquia

In the 1990s, Medellín was considered the most dangerous city in the world due to the fight against drug trafficking (more than 11,000 murders were recorded in 1991 alone).

The epicenter of this violence was Comuna 13, a neighborhood in the west of the city where violence was the order of the day. Today, however, the situation is completely different: Medellín is one of the most touristic cities in Colombia and this neighborhood has become one of the liveliest places in the capital of Antioquia.

Note: Due to its tourist importance, there are many organized tours in the area.

Why should you take photos in Comuna 13?

Comuna 13 is currently one of the most featured places on Instagram in Colombia. The city’s history is charming, but the colorful streets and graffiti make this area an ideal place for street photography and nice selfies.

Jardin is one of the 17 Colombian Heritage Cities. This beautiful community is known for its colonial architecture and colorful atmosphere.

Why should you take photos in the Jardín?

Like many other Colombian cities, Jardín is a great place to take photos. The colorful houses and colonial architecture make the city an ideal place for street photography. There are also various waterfalls and incredible places like the Cueva del Esplendor, a cave with a waterfall that comes out of the ceiling.

Jardin is also known for bird watchers and bird photographers, because the Andean rock cock can be found on a local finca and can be approached within a few meters.

Places to take photos in Santander

Barichara is undoubtedly the most famous colonial Colombian city after Villa de Leyva. It is not for nothing that Barichara is known as “the most beautiful village in Colombia”. Like Barichara, Guane is characterized by beautiful architecture and a relaxed atmosphere.

Why should you take photos in Barichara and Guane?

Barichara is a popular place for photography. Thanks to the architecture, street shots are guaranteed to be successful. In the vicinity of the village (10 minutes away) there is also the “Salto del Mico”, a lookout point where there is a rock above the huge abyss. The Instagramer are sometimes queuing up to take a photo. This also applies to Guane, whose unique architecture allows for beautiful street photos and unique selfies.

Be careful with the Salto de los Micos, people have already fallen into the abyss.

Probably the most impressive natural wonder of Colombia is the Chicamocha Gorge, a 2 km deep and 227 km long geographic fault line.

Note: For more information, I recommend my guide on Chicamocha Canyon.

Why should you take photos in Chicamocha Gorge?

There are a variety of viewpoints around the Chicamocha Canyon. For this reason, it is ideal for impressive panoramic shots and beautiful portraits. There’s even Parque Nacional Del Chicamocha (Panachi), which has a 360-degree viewpoint.

One of the hidden gems of the Santander department are the incredible windows of Tisquizoque. This is a 90 m long cave and at the end a huge opening with a waterfall surprises.

Why should you take photos in Las ventanas de Tisquizoque?

Las ventanas de Tisquizoque is an excellent place to take photos as it is a lookout point in a cave.

One of the most unbelievable tourist attractions in Santander is the Cerro del Santísimo, a huge, approximately 37 m high statue of Christ. Next to the statue there is a 40 m high vantage point at the back, from which one can see the municipalities of Girón, Piedecuesta, Floridablanca and Bucaramanga.

Why should you take photos on the Cerro del Santísimo?

The beautiful view of the communities and the imposing statue make the Cerro del Santísimo the ideal subject for photos.

This municipality has rightly earned its name as the tourist capital of Santander. San Gil is an ideal destination for many extreme sports such as rafting and bungee jumping.

Note: For more information I refer to my Santander travel guide.

Why should I take photos in San Gil?

As mentioned earlier, extreme sports are the main attraction of San Gil. Most providers offer a photo service (for a surcharge).

Another great natural wonder in Colombia is the unique Los Estoraques natural area, which is just 30 minutes from the historic town of Playa de Belén.

This special natural wonder is an area of ​​more than 1000 hectares in which one can find an infinite number of gigantic rock formations. These were created thousands of years ago by erosion.

Places to take photos in Putumayo

The most famous natural wonder of Mocoa (capital of the Putumayo department) is the famous Cascada del Fin del Mundo (Waterfall at the End of the World). This waterfall is 70 m high and the summit can be reached after a hike of about two hours.

Why should you take photos at the Cascada del Fin del Mundo?

At the waterfall you can safely advance to the edge and take spectacular photos.

Punta Gallinas is considered to be the northernmost point in South America. In this paradisiacal place there are beaches like the dunes of Taroa or Boquita, with a unique view, as well as flamingos.

Why should you take photos in Punta Gallinas?

The area is developed for tourism, but is not yet visited by the masses. Unique photos are definitely guaranteed in the area.

The Flamingos fauna and flora reserve is only an hour away from Palomino. There you can also find exotic flamingos.

Why should you take photos at Los Flamencos Fauna and Flora Sanctuary?

If there’s one thing that has become Instagram-worthy lately, it’s animals. A photo with a beautiful, fluffy puppy is always guaranteed to attract attention, and the same goes for exotic animals like flamingos.

A telephoto lens is useful here.

Places to take photos in Nariño

The Santuario de las Lajas, which was named the most beautiful church in the world by the British The Telegraph and is also one of the 7 wonders of the world in Colombia, impresses with its Gothic style, its height of more than 100 m and its imposing bridge.

Why should you take photos in the pilgrimage church of Las Lajas?

The architecture, the surrounding nature and the imposing sanctuary make Las Lajas an ideal place to take unique pictures for its networks.

Places to take photos in Chocó

One of the many paradises in Chocó is undoubtedly Nuquí. There are several beaches in this municipality such as Coquí, Guachalito and Joví. These beaches are characterized by a beautiful green landscape and the imposing sea. Humpback whales can also be seen from July to November.

Why should you take photos in Nuquí?

The beautiful combination of jungle and beach makes Nuquí an ideal travel destination.

Like Nuquí, Bahía Solano is another paradise in Chocó. This wonderful community has a great variety of beaches accompanied by the beautiful scenery of the Choco Jungle. In addition, Bahía Solano is also visited by the impressive humpback whales from July to November.

Why should you take photos in Bahia Solano?

The natural spectacle of Bahía Solano is almost incomparable, just like in Nuquí. The combination of the jungle and the beach makes this community a great place to snap the full panorama.

Activities and Tourist Destinations in Colombia

Dear reader, below you will find a list of incredible activities and tourist destinations to do in Colombia: 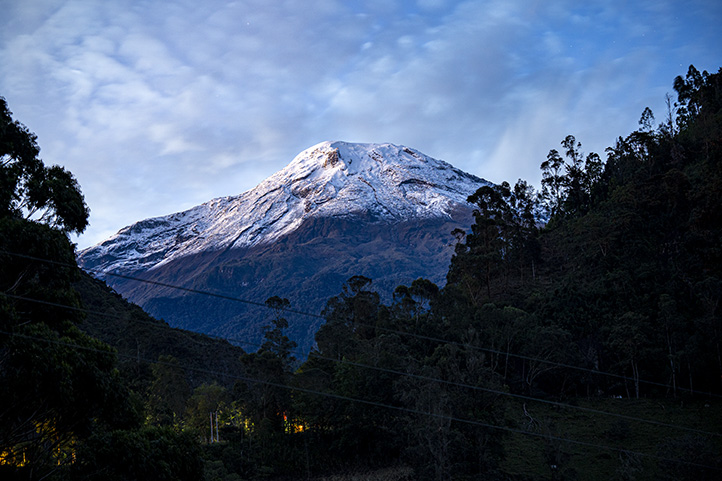