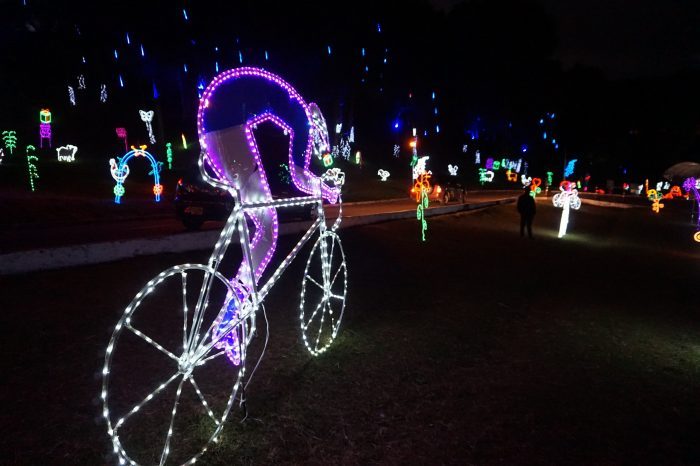 The Christmas lights of Boyaca Colombia

We left La Candelaria in Bogotá at about two o’clock in the afternoon to head to Boyacá for the route of lights. Our plan was very ambitious, as we wanted to drive to Nobsa- the town of the mangers and our northernmost destination- and then return to Bogotá by passing through “El Pueblito Boyacense” in Duitama, the Corrales – or the “light of Colombia”, the ¿Tibasosa? Bridge of Boyacá, and finally the Villa de Leyva! Indeed, a very ambitious plan! If all were to go well, we should return to Bogota around 2 a.m.

More Information you also will find under our Boyaca tourist information.

Shortly after starting, we found ourselves in a traffic jam on the highway. We were a bit concerned that we were not going to make it out of the city limits before “pico y placa” started, but we did! We kept on driving towards Tocancipá, and I must warn drivers to be attentive with the traffic signs because it’s easy to take the wrong exit (not because it happened to us, not at all…). On the way to Duitama, our first stop was the Sisga reservoir. From the road it cannot be spotted easily, and you need to drive over a small, red bridge of less than 50 meters. We stopped to stretch our legs and enjoy the landscape. You also can access the reservoir going to the restaurant “El Refugio del Sisga” on Autopista 55, KM 68 Bogotá-Tunja. There you can find a lookout point that overlooks the reservoir. The view certainly makes this place worth a vist. The area also has nice walking trail along the shore.

The restaurant offers a great view, surrounded by big and lush trees. You will find various animals like white doves, punk chickens, and llamas, and for the kiddos there is a nice playground. We didn’t eat here, but you can find information on Tripadvisor if you are interested in its reviews.

The best arepas in Colombia

We continued our trip and our top priority was to stop at Venta Quemada. According to Sebastián, “Venta Quemada” is a famous location along the road with restaurants where you can taste the highly debated arepas boyacenses. The debate ranges from those who find these arepas to be a delicacy of the gods to those who find them quite the opposite. We interviewed one of the ladies cooking at the restaurant Puerta Boyacense arepa factory. She didn’t talk about the origin of the arepas, but she did show us how she prepared them. These arepas are made from maís pelao, cuajada (a type of cheese), salt, and panela. The cuajada is placed in the middle of the corn mace and the panela (or the sugar) gives it the characteristic sweet flavour. It is roasted and served with a cup of hot agua de panela and cheese. In the restaurant they also offer “picada”, chicken, génovas, and other delicacies from the region. We discovered that Venta Quemada is, in fact, a town, and its correct name is Ventaquemada. According to Wikipedia, “Former names of Ventaquemada are Padua and La Venta, indicating the commercial centre at a strategical location along the road between Bogotá and Tunja. Historically it was the most important city of the Altiplano. After the properties of Albarracín burned, the name Ventaquemada (“burnt sale”) was given to the town”.

Boyaca Bridge during Christmas in Colombia

Leaving Ventaquemada, we decided to keep driving to Puente de Boyacá and make the first official stop on the Christmas Lights Route. When we arrived, it was still daylight, so we climbed a hill through a small path made of rocks until we reached the Simon Bolivar statue. Here, the monument and landscape can be fully appreciated. From there we enjoyed the vibrant colors of the sunset and watched as the Christmas lights grew brighter and brighter as the last notes of daylight disappeared. Once the night had arrived, luminous drops began falling from the trees. Arches made of stars, flowers, hummingbirds, and farmers from Boyacá with their typical outfits and animals – chickens, cows, sheep and pigs- lined the pathways. But this wasn’t as impressive as the many luminous cyclists riding all over the place, providing us with a tribute to Colombian sport talents and elevating Boyacá as the cradle of the great “escarabajos” (beetles), or cyclists like that of Nairo Quintana and Miguel Angel López.

Despite the beauty, we spoiled the route, or, the schedule, because it was late, and we were still far from our destination. We went directly to Nobsa, and it took us about two hours to get there. When you travel in Colombia, the seemingly small distnaces between point A and point B often take longer than anticipated. When we finally arrived, we were greeted by the huge Holcim Cement Plant building, which is owned by the Swiss Holcim group and one of the biggest cement factories in the world. At first, we thought we were lost, but we eventually found the town’s center by following the lights on the church tower.

When we arrived, we found a little square filled with vibrant and colorful lights, depicting an image of the countryside that included several women farmers from Boyacá. In the central square, we saw a castle that was straight out of a fairy tale, and it was very well illuminated next to the spectacular Christmas manger, which appears in every town along the route. Without a doubt, Nobsa is a great place to visit, despite its quaint size.

Around the square we found several craft shops and cafes, but by that time, they were all were closed. Beyond the square there were no lights, so the tour only lasted about 20 minutes. It’s important to note that the church is very special and quite ornate on the inside. It is a baroque style temple of three naves with a structure made completely out of stone, built at the end of the 19th and beginning of the 20th century.

From Nobsa we traveled to Pueblito Boyacense, despite the recommendations from a local girl to keep going until we arrive in Corrales because it had, according to her, the best light decorations in Boyacá. We arrived in Pueblito Boyacense in about half an hour. The entrance cost COP 2.000 and the toilet cover was COP 1.000. The town was beautiful, full of houses and small pathways displaying the towns lovely craftsmanship. We completed the tour in about half an hour, as there weren’t many people and the church, along with some restaurants and craft shops, was closed. It was about 9 o’clock at that point. Outside the town’s center, we found a small candy shops, fast food, some handicraft shops, and a big parking lot.

From there we went in search of a restaurant, but Duitama was fast asleep, making it difficult to find an open restaurant. Finally, we found a “truck driver” kind of restaurant that still offered food. A simple, clean, and big place with plastic tables and chairs and occupied by a few drivers eating. The service was fast, but because we were so hungry, we definitely had channel some patience until we finally received our food. Therefore, our Christmas dinner consisted of a simple soup followed by some rice, homemade fried potatoes, onions, and tomato salad with a beef steak. An authentic Colombian experience! Aura and I made it even better by drinking a traditional Colombian soft drink, Manzana Postobón. (We then discussed the best Colombian soft drink, which for me is Glacial Crema Soda, for Aura, mmm, I don’t remember… sorry… Sebastián didn’t say, and Frank just said: “ughh”).

Once we finished the meal, we thought “Happy belly, happy heart!” We left for Villa de Leyva at 10 pm. On the 2 hours drive from Duitama, we tried passing the time by playing a game where you guess the names of artists and movies, but we got bored quite quickly. At one point the navigation App guided us through a very dark neighborhood in Tunja, and I was really scared!

Since you cannot see the landscape at night, the only way to gauge how close you are to Villa de Leyva is by the curvy road and the, brown color of the things outside. We arrived and found a small and white town, soberly decorated at the central square. There was a huge square with a little fountain in the middle, trees and an atrium coated in lights, and several surrounding, buildings coated in lines of yellow light. According to our historian, the size of the square, which was quite large, meant that it was for military training and formations.

We met Natanael, a friend of Frank’s, for drink in a salsa bar in front of the church. As a precautionary note, do not pet the street dogs. Aura was almost bitten by a dog that was trying to sleep. I went to explore the surroundings of the square, until they called me to take the end of the year picture, in which another street dog, much nicer, posed with us. He might be used to it.

Sheltered by the early morning silence, we started our way back to Bogotá. I must confess that I was scared about traveling so late, from so far, the fear just seemed to be in my head. The road was fast and safe. If you want to travel the country by car, it is quite doable. The army and the police were out patrolling, and in two and a half hours, we were back in the city. At 3 am each of us arrived home, quite tired I might add.

In the end, our plan turned out to be a bit too ambitious. It is not possible to achieve the complete route in just one night, unless you are willing to spend most of the time inside the car or to do quite speedy tours in each place. Even then, however, you will likely still have to skip some places. I would recommend choosing one or two places or speaking the route out over two days.

Find more information in our Colombia Travel Guide. And don’t look any further for a travel agency in Colombia specialized on luxury and custom travel.