Cartagena: city of lights and shadows

Cartagena is a city in the Bolivar department and is considered one of Colombia’s tourist gems. It has a unique atmosphere and incredible architecture. Thanks to the extensive city walls, Cartagena has been declared a World Heritage Site by UNESCO.

When you think of a trip to the beach, imagine yourself relaxing, enjoying the sun and admiring the sunset, walking in the sand with your partner, or taking a dip in the ocean. The big problem with this dream is that you probably won’t be able to make it come true in Cartagena for one simple reason: it’s too crowded.

Cartagena is a popular travel destination for locals and foreigners alike. According to the Ministry of Trade, Industry and Tourism, the city visited 530,178 foreign visitors in 2019. 1,361,403 Colombians visited Cartagena between January and July 2019. Simply put, this city’s beaches are always full.

The atmosphere on Cartagena’s beaches is mediocre

If you think of Cartagena as a paradise with blue waters and white beaches with beautiful, soft sand, you will be disappointed with the reality. The Walled City’s beaches are characteristically dark, almost brown in color. Because of this, the sea water looks dark and unattractive. In the past (more than 70 years ago) the sea of ​​Cartagena was blue and beautiful, but this changed with the construction of the Canal del Dique, which connects the mouth of the Magdalena River to the Caribbean Sea.

Sediments and other substances get from the Magdalena River into the sea, which color the water dark. In 2016, due to the El Niño phenomenon, the Magdalena River sediments did not flow through the dike. This caused the water of the sea to return to its original color, namely turquoise blue. Unfortunately, this only happened temporarily.

It’s no secret that pollution is a problem around the world. Cartagena is not spared from this problem. Due to the high number of visitors and few controls, the situation on many beaches is precarious.

Even in this year (2021), in which tourism has been massively reduced due to COVID-19, the newspaper El Universal reports that the amount of garbage has increased in the high season and that “plastic, plastic sheeting, closures, shoes” is on the beaches , Packaging and even mouthguards “finds. The beaches of Cartagena also have another problem, as a large amount of garbage also flows into the sea from the Canal del Dique.

Tourist fraud is the order of the day

In many parts of Colombia, the salespeople are very persistent. Sometimes you are even persecuted by sellers and almost forced to buy.

Fraud on the beaches of Cartagena

It can happen that vendors charge 25,000 pesos per can for a beer. That is almost ten times the market price. These are not isolated cases. An unusual situation was recorded by the El Tiempo newspaper when a masseuse (abundant on Cartagena’s beaches) “gave” a trial massage to an 80-year-old woman. After the trial massage and failure to pay, a legal dispute broke out between the woman and the masseuse.

The elderly lady’s family agreed to pay 10,000 pesos (just over $ 2). The family was subsequently assaulted.

The prices are exorbitant

Sometimes there is a decoupling between the service and the requested price. The best example of this is the island of Cholon. I was there myself and refrained from consuming it. Not only were the prices very high, but the quality was subterranean. There you can pay 40,000 pesos for a portion of burnt rice. This is then served cold and on the cheapest plastic plate in the world.

I have no problem paying a good price for a good fish or tasty seafood. What is offered there, however, is pitiful quality at exorbitant prices. This example can also be found in other places around Cartagena.

Uncertainty on some of Cartagena’s beaches

Admittedly, the situation has improved in recent years. The more famous beaches like Bocagrande, Castillogrande and Laguito have constant security measures, but unfortunately theft is still common in these areas.

Cartagena is a city of lights and shadows. While the city’s beauty is undeniable, it cannot be denied that there is a lot of uncertainty. In the Marbella beach sector, for example, theft is very common.

Alternatives to the beaches of Cartagena

If you are looking for a better beach experience and do not want to be bothered by beach vendors and massage providers all day, there are many good alternatives for a wonderful day at the beach close to Cartagena. 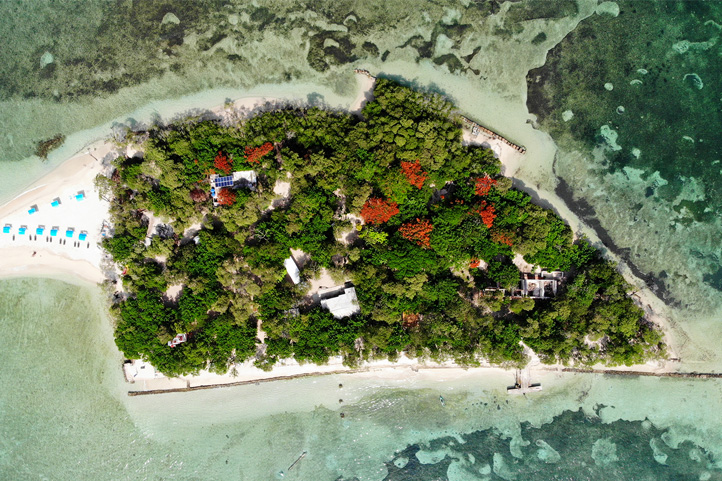 Less than an hour from Cartagena is one of Colombia’s most famous paradises, the famous Rosario Islands, which are made up of 28 different islands.

Together with the Archipelago of San Bernardo (a group of 10 islands) they form the Parque Nacional Natural Marino Corales del Rosario y San Bernardo, which is characterized by its incredible beaches with blue waters and beautiful beaches. The Rosario Islands are also known as an excellent place for diving.

A little less than an hour from Cartagena, this beautiful island is characterized by its calm and turquoise waters. You can also find coconut palms there. Jet skis and kayaks can be rented on the island.

Another beautiful island is Majagua. It is characterized by its turquoise water, lush vegetation and its beautiful beach. You can also go diving on this island. The Hotel San Pedro de Majagua has a diving center where you can take diving courses and mini-courses.

How to get to the Rosario Islands

The Rosario Islands are about 50 minutes by boat from Cartagena. 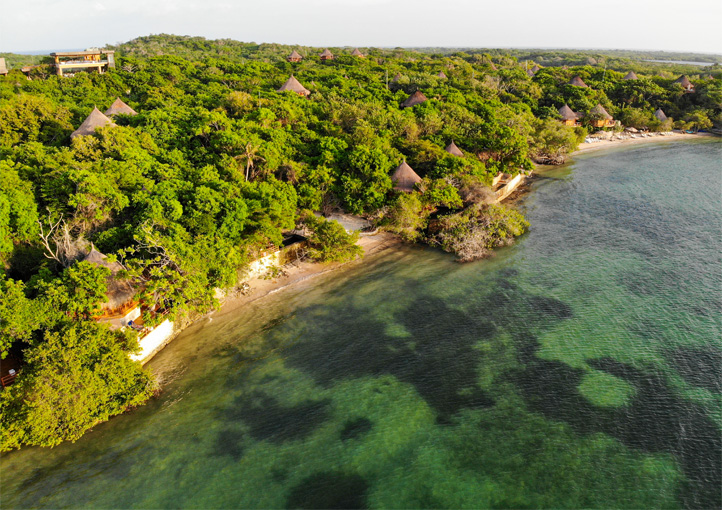 Another enchanting place near Cartagena (although technically part of the urban area) is the famous Baru Island, which stands out for its crystal clear waters and beauty. Although this place is known as Baru Island, it is actually a peninsula as a bridge was built to connect it to Cartagena. It can currently be reached by land.

Even though Baru is relatively small, there are several beaches, of which Playa Blanca is the most famous. However, this beach is not that attractive as it is usually crowded and the vendors and masseurs are very pushy. In the water you always have to be careful not to get run over by a boat or jet ski.

A very quiet private beach with blue water, lush vegetation and a relaxing atmosphere. Activities such as kayaking can be enjoyed on Puntilla Beach. The beach belongs to the Royal Decameron Baru Hotel.

Surrounded by lush vegetation, the sea with crystal clear water and the opportunity to experience spectacular sunsets, Isla del Encanto is an excellent way to spend a few relaxing days and enjoy nature.

This is located in the northern part of Playa Blanca. As the name suggests, there are fewer people here and the atmosphere is quieter.

How to get to Baru Island

Isla Palma, located in the San Bernardo Archipelago, is also one of the most beautiful beaches in Colombia. The beach is calm and the water is clear. Colorful flamingos are also at home on Isla Palma.

How do you get to Isla Palma?

This paradise island is two hours from Cartagena. To get there you can take a boat from Bodeguita.

Isla Múcura is also located in the archipelago of San Bernardo and is characterized by an incredible panorama, a wonderful beach and crystal clear water. Various activities can be pursued on this paradise island. In addition to sailing and kayaking, Isla Múcura is an excellent place for diving, because in the depths of the water you can see beautiful species such as parrot fish and turtles.

How do you get to Isla Múcura?

There are boats every day from the Muelle de la Bodeguita. The journey takes around 2 hours.

One plan that can perfectly complement your visit to Múcura is a trip to Tintipán Island, just minutes away. The water around this beautiful island is also turquoise blue.

How do you get to Isla Tintipán?

A boat ride from the island of Múcura takes about 10 minutes.

While we don’t recommend Cartagena’s beaches, that doesn’t mean there aren’t any great spots near Cartagena. An example of this are the Salinas de Galerazamba. Due to the high concentration of salt in the sea that washes this beach, the water is colored pink, which creates an impressive effect.

You cannot swim on this beach, but a walk is worthwhile because of the wonderful atmosphere. The pink color of the water can be seen most clearly in the months of December to April and August to September.

How to get to Salinas de Galerazamba

This beautiful beach is located in the locality of Galerazamba, which is part of the municipality of Santa Catalina. This village is 19 miles from the walled city and takes less than an hour to drive.