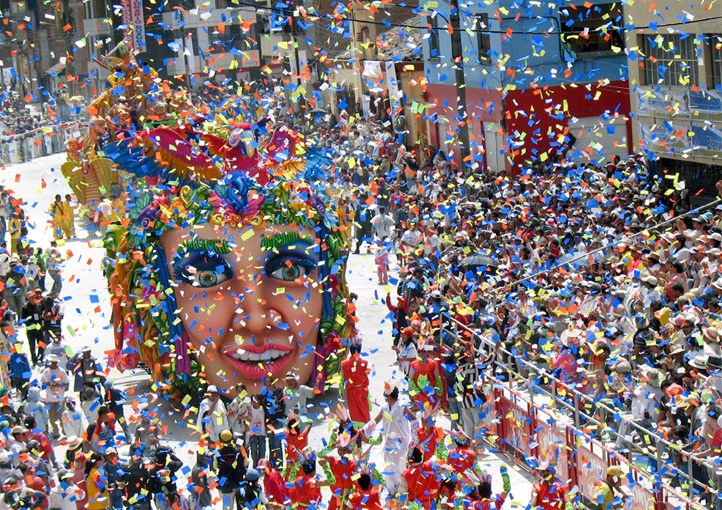 Carnival of Blacks and Whites in Pasto, Colombia

The city of Pasto, in the southwest of Colombia and located at 2527 m above sea level, is the scene of one of the largest carnivals and celebrations that we have in the country. Although it is not the only city that celebrates those days in the region, it is the one that has gained the most recognition worldwide. The UNESCO declared this carnival intangible cultural heritage of the humanity on September 30, 2009. It is celebrated from December 28 to January 6 in several stages.

The carnival has a long history which comes from the inheritance of the indigenous culture of Los Pastos, who inhabited that region before the arrival of the Spaniards. This culture asked the god of the moon for protection for their crops and good harvests. With the arrival of the colonizers, the religious element also reached the celebrations. The black slave trade also brought the African culture to the area.

The Carnival had a long evolution process and several elements have been recently introduced. From nearby regions, for example, different customs were adopted. Such as January 5th, the day on which the black slaves of the region of Popayán had been freed and were allowed to celebrate according to their customs, thanks to a permit from the Spanish Crown and after uprisings and revolts.

From here comes the renowned Day of the Blacks, where the participants make up their faces with black paint and go out to dance and play in the streets. Another celebration, which was adopted in the early twentieth century, is the arrival of the Castañeda family, when according to oral tradition, a family from the Putumayo comes to the city with a caravan of members and all their belongings calling the attention of the residents. This was then adopted to make a performance on January 4, which is still practiced today.

From the early twentieth century until now, the transformation of the carnival has been drastic. Although it was not until the forties and fifties that this festival was adopted in an official way, it was already celebrated by the elites, who at some point began to paint the men with the make-up of the women to go out to celebrate. This is the birth of the celebration of January 6, the Day of the Whites.

Today, the celebrations start on December 28, the day of the Holy Innocents. It has been called the day of water, and consists of wetting unsuspecting people. It is the day of jokes, although many do not like to be wet because the temperature in Pasto is 15ºC on average. The pre-carnival parties continue to December 30 with the serenade to Pasto, where Andean music takes center stage.

On December 31, there is the “Parade of Old Years” where satirized characters and fictitious characters represented by puppets and big dolls take the streets. Finally, all those figures are burned in a big fire to end all the bad things from the last year and to make space for the good things to come. The celebration continues on January 3 with “El Carnavalito”, which is a fairly new part of the celebration, where children are the main characters. They represent the last day of Carnival with all its activities but on a smaller scale.

Then follows the aforementioned “Castañeda Family Day”, “Day of the Blacks” and “Day of the Whites”. For these last days of the carnival, on January 6, people use talc and cornstarch to paint their skin white. This day is for whites and those who are not painted to participate in parties. The most representative activity of this day and perhaps of the whole carnival is the parade of floats.

It is very interesting to see how the floats have taken a leading role throughout the carnival and the fame that has been created in Colombia. In fact, many argue that it is the elaboration of these and what they represent that is one of the most important reasons why the UNESCO declared the carnival as an intangible cultural heritage of humanity.

For approximately five hours, the streets of the city of Pasto lend themselves to the presentation of these giant figures that, mostly at this stage, are made of polystyrene and paper mache (the latter is one of the requirements of the contest). A few people continue to make the floats in the old style: with a structure of wood, clay and paper. Some of the artists can spend four months designing and building these giants that will serve as a finale to one of the largest carnivals in the country.

The traditional technique is complex and takes a long time. The first step, after having developed the idea and the design, is to build a structure in wood. Then, it needs to be wrapped with paper-lined mud. Next, the craftsman must tie the clay with a rope so that it does not fall off, and then start sculpting the figure. Five or six layers of paper should cover this figure in clay. When the paper dries, the mud is removed so that the figure is hollow. Finally they proceed to paint the created figure.

Although this form of creation is being lost due to the complexity and its vulnerability to rain, you can still make some trips through the workshops of those who create them in the traditional way to see and understand the process.

The carnival in 2017 also featured the first Gastronomic Fair of Carnival, which also seeks to show the gastronomic delights of the Nariño region. In addition, there are theatrical shows and craft fairs, where the visitor can admire and purchase local products.

Currently, the Carnival of Blacks and Whites shows the cultural diversity of our country, which has fed and transformed the cultures since the colonial era that were part of the same geographical space. It also expresses the celebration of multiculturalism and equality, where not only the elites of the city celebrate, but seeks to be an inclusive celebration with the entire Pastusa society and its visitors.

Although Pasto is the capital of the department of Narino, there is a whole lot more to discover in the beautiful region. From Volcanoes to coffee plantations, stunning landscapes and even Pacific Coast, this department itself is a marvel. For more information about the region just visit our Narino Tourist Information. If you would like to visit the festival, contact us today.

We are travel professionals and run a travel agency in Bogota for custom made trips. Are you still indecisive?